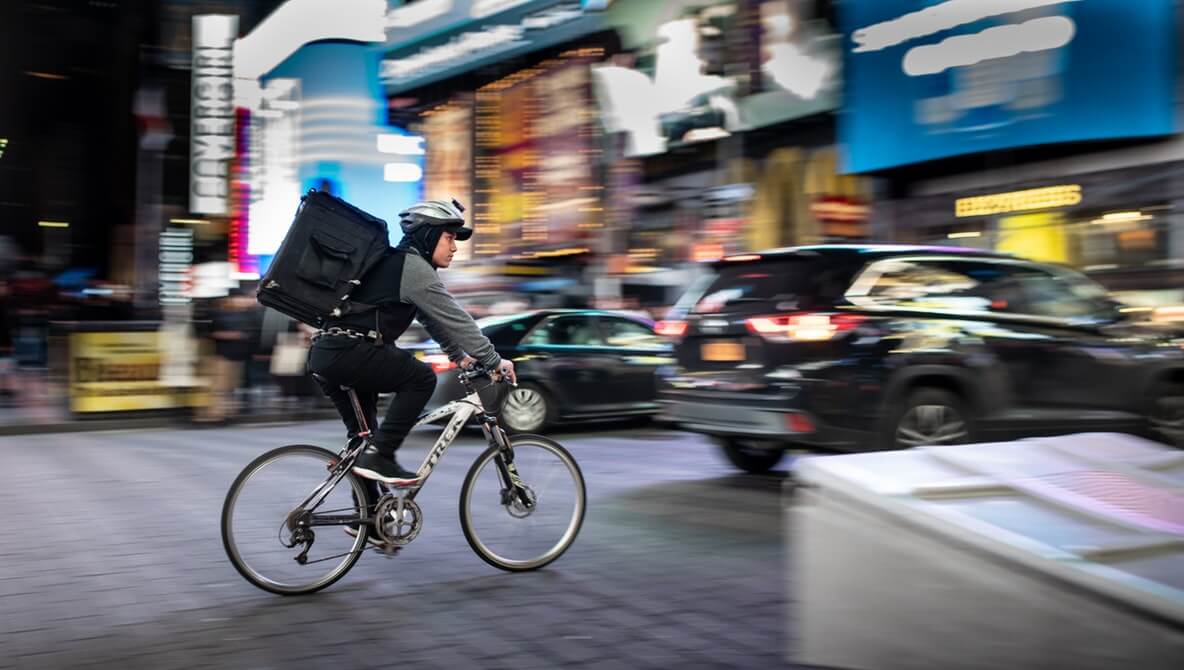 Note: this article initially appeared in our CEO’s industry newsletter. Sign up here for regular insight and analysis on the future of restaurant technology.

I’ve spent a lot of time the past few weeks thinking about the current third-party delivery business model.

Delivery drivers for DoorDash – which raised >$1 billion in the past twelve months – accuse the company of skimping on tips. On the surface, it seems hard to fathom. And yet, they’re following the playbook established by Amazon, Uber, and other giants of the internet age: control the end-consumer while squeezing the supplier.

I went down the rabbit hole to suss out the implications of the current delivery business model and why it matters.

Thinking out loud about the third-party delivery business model🧠 😱

A few weeks back, I finally caught up on the Instacart + DoorDash tipping saga. Basically, they’re using tips to subsidize the minimum amount they guarantee per job. It’s like paying someone on a tip credit basis and not actually telling them. Here’s the quick math to better illustrate the point:

Collectively, Instacart and DoorDash have raised over $3 billion. Capital like that comes with a lot of strings attached. You need flawless execution in a fast-growing market, a liquidity event (IPO or acquisition) on the horizon, and a pathway to profitability (the only way public market investors will seriously stick around for the long-haul).

Are the current economics really so bad that they need to skimp on tips to hit these goals?

“Cloud restaurants” were the first crop of companies to curry favor from Silicon Valley investors. Before the current battle between DoorDash, UberEats, Grubhub, and (sort of) Postmates, companies like Sprig, Maple, and Munchery attempted to control everything –supply chain, meal production, marketing, customer experience, and delivery all under one roof.

That model finally blew up with Munchery’s abrupt shut down in January (Sprig and Maple both closed down in 2017). Investors thought these would be the next generation of food service companies. Instead, they got restaurants with apps that tried to scale before figuring out the economics first.

When Munchery abruptly shut down in January, one of its vendors published a lengthy post about how the economics of the business shortchanged suppliers

Which brings us to the current delivery business model. Today, third-parties play more of a middleman role. Instead of handling everything, they connect diners with local supply (your restaurant) and facilitate the logistics. The economics here are significantly better, but it’s still massively unprofitable.

As Uber CEO Dara Khosrowshahi mentioned at the beginning of last year: “The part that is not going well is the profitability part. This has been a business tuned for growth, not efficiency.”

Even at scale, the jury’s still out on if this delivery business model can be profitable. Look at China, where massive “lifestyle apps” like Meituan Dinping and Ele.me are in a food delivery death match. In its most recent earnings report, Meituan reported that its gross margin on its core food delivery business “improved” to…13.4%!!!

Are the domestic third-party players going to follow in these footsteps?

Under the hood on economics 🙈

Looking at the underlying delivery business model sheds light on how the economics could change.

You need to satisfy essentially three parties on every transaction. The diner needs delicious food on time and at a competitive price, the restaurant needs profitable incremental business, and the delivery person needs to earn a decent amount on every job.

Note the balancing act involved in successfully scaling a business with these kinds of economics – under the current scenario, third-parties earn And under a revised driver payment model (i.e. without the tip credit method), third-parties actually lose money on every order.

We’ve seen where the playbook goes from here in other markets. When it comes to balancing the needs of suppliers and customers, its generally suppliers (in this case the restaurants and delivery people) who get squeezed.

Talk to any Uber and Lyft driver that’s been around for more than a few years. Recent data suggests they’re making less than half of what they made five years ago). Look at Amazon – Prime members often don’t seek out those actually making the goods, just whether the reviews are good and if it comes with free 2-day (or faster) shipping.

Access to these end-consumers is so potentially lucrative, that suppliers have no choice but to play on the aggregator’s terms. (Note: Ben Thompson dubbed this dynamic Aggregation Theory – you can nerd out to whole thing here).

In this context, it’s no surprise really that Postmates and DoorDash recently launched their own respective subscription services. By locking diners in via a subscription model, they can fully own the customer relationship and make diners loyal to their platform. And as these businesses scale, I’d expect them to pull right from the Uber and Amazon playbooks of further squeezing suppliers. This includes ratcheting up per-order fees and/or further diminishing pay for drivers, or a combination of the two.

We’ll get a clearer sense when Uber and Postmates publicize their IPO filings, and as Waitr furthers its track record as a public company.

What’s the way forward for operators? 🤔

If the current paradigm holds, there are two models that I’ve seen work.

The first requires owning everything, from the order platform all the way to delivery (Panera); the second involves owning the order platform, and only using a third-party to fulfill the order (Chipotle). The latter in particular – which seems more viable for mid-size brands – comes with a reduced fee since you’re only leveraging the DoorDash or UberEats platform for logistics, not demand generation.

In both scenarios, the restaurants (crucially) preserve the relationship with the end-consumer. They control most of the experience and still own the customer data. It’s not a coincidence that Panera and Chipotle both recently announced that delivery is turning out to be massively profitable. There’s definitely more upfront investment on this path, but considering how large the opportunity (and how early it still is in the overall delivery game), it’s one that brands are wise to take sooner rather than later.

What do you think? Is third-party delivery business all incremental, so you’re willing to deal with lower profitability and parting with the data? Is there anything other operators should keep in mind when it comes to scaling delivery? Or do you disagree with my premise entirely?

Let me know your thoughts at abhinav@bikky.com!

Demystifying the restaurant marketing funnel (or how to break the flywheel 101)
What we talk about when we talk about customer engagement
Virtual Graffiti: How Much Does Yelp Matter?
The Tools You Need to Build Customer Loyalty